OZAWKIE, KAN --  A Menninger scientist who combined Eastern meditation techniques with Western medicine left instructions in his will for establishing a library near Ozawkie, Kan. 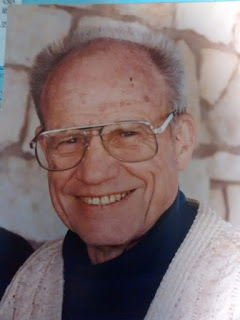 Colleagues of Elmer E. Green -- a pioneering scientist in the fields of biofeedback and consciousness -- are planning to create a library at his home at Perry Lake.

Green, who died at age 99 on March 5, 2017, was a world class sailor, pianist, chess player, author and a director of the Voluntary Controls Program at the Menninger Foundation. Green was a physicist who studied Eastern mystics and yoga masters like Swami Rama and delivered lectures on biofeedback around the world. He worked over 30 years at Menninger in Topeka before the institution moved to Houston in 2003. He taught biofeedback as a process whereby electronic monitoring of a normally automatic bodily function is used to train someone to acquire voluntary control of that function. In the 1960s and 70s, that was a revolutionary idea, but today biofeedback is more accepted by the scientific community, largely because of research by Green and his associates, said Jeff Nichols, a medical doctor who worked with Green at Menninger.

Elmer Green was one the greatest scientists to ever work at the Menninger Foundation, Nichols said. He was able to bridge mind/body medicine with psychoanalytic theory at the Menninger Clinic – identifying the unifying emphasis on bringing the unconscious to consciousness leading to self-regulation and self-mastery.

“He was a pioneer in the science of consciousness. The library was his final project,” said Nichols, executor of the Elmer Green estate.

Peter Parks, a Topeka therapist who worked for Green at Menninger, said Green left specific instructions to create a board of directors for the Elmer E. and Alyce M. Green Foundation. The board has applied for 501(c)3 status as a nonprofit organization. The board of directors includes Parks, Sarah Bremer Parks, Jeff Nichols, Karen Malik, Celia Coates and Lesley Carmack. Under that umbrella, there will be the Elmer E. Green Transpersonal Library and Archive.

“It is definitely in his house,” Parks said. “He was very clear about that location.” His house is located on a hill facing the northeast corner of Lake Perry, near Ozawkie, Kan. The location is abundant with trees, animals and birds. Parks said the library will be a “private library and archives with a focus on promoting the science of consciousness studies.” 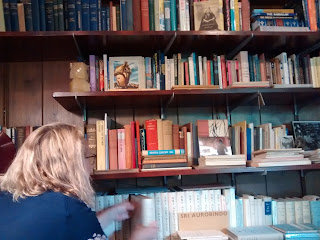 Green’s collection includes numerous scientific and metaphysical books including all six volumes of Henry Steel Olcott's "Old Diary Leaves: The Only Authentic History of the Theosophical Society,” and books by Alice Ann Bailey, "Treatise on the Seven Rays," "A Treatise on White Magic," and "A Treatise on Cosmic Fire." He has an early copy of “The Tibetan Book of the Dead” by Dr. Walter Y. Evans-Wentz, who popularized Tibetan thinking in the Western world.

“What Elmer was part of was the merging of the spiritual traditions and practices of the East and the scientific methods and practices of the West,” Nichols said. Subsequent research in mindful meditation has demonstrated numerous health benefits, Nichols said. Westerners who use biofeedback, meditation, mind control, and self-healing techniques owe a debt of gratitude to Green.

There is a collection of science fiction books, catalogs of trips, lectures and research papers on biofeedback and transpersonal psychology, journals and correspondence with his wife Alyce and other colleagues at Menninger and the around the world.

Parks said Green left some money for the purpose of supporting the library. The board is in the process of raising funds. There should be well over $100,000 to get the library going. Green predicted that the library will no longer be needed after 125 years. By that time, humanity will have evolved enough to control greed, deception and destruction of the Earth and Humankind, Green said.

“Elmer believed there is an evolutionary process taking place with humanity, that human beings are actually making progress,” Parks said.

Elmer was 23 when he married Alyce, who was 10 years older and had two children from a previous marriage, Patricia Norris and Doug Boyd. The late Doug Boyd wrote several books including “Swami Rama” and “Mad Bear: Spirit, Healing, and the Sacred in the Life of a Native American Medicine Man.”

Elmer and Alyce had two children together, Sandra Gey and Judith Green. Patricia Norris has known Elmer Green for 74 years. He married her mother Alyce when Norris was about 7 years old.

Patricia Norris said it would be more accessible to donate his library to a university like the University of Kansas, which has extensive collections of Kansas authors in its Spencer Library. Norris said that her sister Sandra Gey’s husband Fredric C. Gey, information scientist at the University of California, Berkeley, concluded that most of it is already available through the Internet. Most of the books, like the Olcott books, are available online at the Theosophical Society in America.

“Who would travel to Ozawkie to find a copy when they can utilize this service?” Gey wrote.

“Setting up the library in a remote but beautiful spot is classic Elmer: his own ideas were strongly held. I hope the enterprise is successful,” Menninger said. 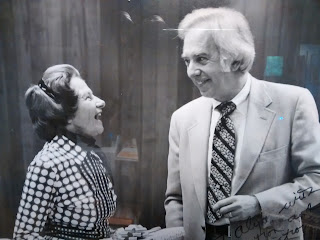 Alyce Green and Roy Menninger share a moment together

There is something special about Green’s home near Perry Lake, said Carolyn Scripps, his personal assistant who cared for Green during the last three years of his life and helped him organize his library.

Scripps said Green built his house on Lake Perry to be close to water and nature. He and Alyce lived there together for many years.

“The library is a sanctuary, a haven for the body, mind and spirit,” Scripps said. “It’s a  supportive place to nurture the highest and best possible in a human being.”

It is true many, but not all of his books can be found in libraries and online. But, they do not have the extensive margin notes of a scholar who has studied these texts throughout his lifetime, Scripps said. Some books from Green’s teacher, Will J. Erwood, are not available anywhere else. There are also first-edition signed books sent by authors who appreciated Green’s contribution to the science of consciousness. These books are about topics like out-of-body experiences, meditation, near-death experience, acupuncture and energy healing.

While living at Perry Lake, he wrote “The Ozawkie Book of the Dead: Alzheimer’s Isn’t What You Think It Is,” a three-volume set that documents his time taking care of Alyce while she suffered from Alzheimer’s. The books are also an autobiography of their lives.

Green was raised in Duluth, Minn. He was an honor student and prom king, who loved music and considered being a concert pianist. Instead he earned a bachelor’s in physics at the University of Minnesota and worked as a physicist at the Naval Ordnance Test Station at China Lake, Calif. He worked in optics, electronics and computing. Using high speed cameras, he took pictures of missiles in flight. It was while working there that he and his colleagues took pictures of several unidentified flying objects and turned them over to the government, but such pictures were never seen again, Norris said. Green earned his PhD in biopsychology from the University of Chicago. 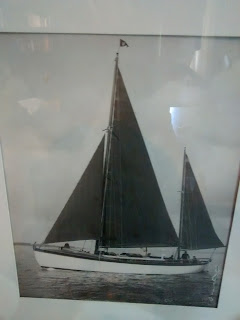 Green took his family on a 52-foot ketch sailboat called The Daphne and sailed across the Atlantic from England to the Caribbean in 1958. At one point during rough seas, the boom fell on him and knocked him off the boat. Norris’ first husband motored back to look for him and found him in the water. After the trip, he looked for a place to work on either coasts so he could be close to the ocean waters, Norris said. 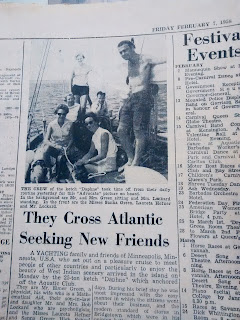 Newspaper clipping of crossing the Atlantic Ocean.
A researcher at the Menninger Foundation contacted Green, who drove out to Topeka to meet him. When Green saw the tower building on the campus of the Menninger Foundation, he was certain he belonged there because he had had a dream vision of the distinctive tower some time before. Green was hired in 1964 and placed in charge of biomedical equipment in the research department.

Around 1970, Green and his colleagues examined Swami Rama at Menninger and measured his ability to voluntarily control bodily processes, such as heartbeat, blood pressure, and body temperature that are normally considered to be non-voluntary. Swami Rama was able to put his heart in Atrial Flutter on his own volition.

Green wanted to show that an ordinary person could use his own mind to control aspects of the body. He found that it was possible to use your mind to warm your hands, a sign of a relaxed body. The process involves meditation and specifically asking the body to move blood into the limbs. One patient who had a history of migraine headaches was able to warm her hands using this mind-control process. As a result, her migraine headaches went away. “Of the first 13 people we tried it on, it worked on 12 perfectly,” Green said in an interview, “Elmer Green: Reflections on His Life,” which can be found on youtube.

Margaret Olwine, a medical writer for The Kansas City Star, had been taking Valium for her hypertension in the 1970s. She took training sessions on biofeedback and was able to warm her hands, and, in the process, lowered her blood pressure. So she stopped taking Valium, according to "Beyond Biofeedback," written by Green and his wife, Alyce, published in 1977. Olwine lived to age 95.

Sarah Bremer Parks said hundreds of individuals participated in biofeedback research and clinical work at Menninger with beneficial results without the side-effects associated with pharmaceuticals.

Peter Parks said Green believed a person struggling with anxiety and depression can use meditation to gain self regulation, self awareness, and, ultimately, self-reliance. Meditation quiets the mind, calms the emotions and strips away stress from outside influences. Then it is possible to listen to the wisest part of the self, and in that place, there is answers. Green didn’t tell people how to live. He helped people find out for themselves, because they often had the answers inside if only they could relax and listen.

Green delivered lectures in Japan, Great Britain, the Philippines and Australia. He gave 40 lectures in California alone. He went on a 4,500 mile motorcycle ride through Europe with Alyce.

In 1973, the Kanpur News, Kanpur, India, wrote an article about Green during his visit there for a yoga conference.

“Through the practice of yoga one can control his physiological processes and thereby control 95 percent of the diseases,” Green said in the article. Green said yoga, which took its birth in the East, has now been recognized as a science in the West. Any kind of mental strain, stomachache, heart troubles and ulcers could be cured by yoga exercises, the article said.

Green was a founder of the Council Grove Conference on Consciousness And The Voluntary Control of Internal States, held annually at Council Grove, Kan., beginning in 1969. The first people invited to the conference included Carl Sagan, Abraham Maslow, Roy Menninger, Arthur Clarke, Sol Kramer and R.E.L. Masters. Early discussions were on the use of LSD in the treatment of mental illness, Christian mysticism, Tibetan Buddhism and hypnotism. The Council Grove Conference still meets annually.

“The convening of this conference was a groundbreaking event in 1969,” Nichols said.

Parks estimated Green taught his biofeedback techniques to several thousands of clinicians, doctors, psychiatrists and therapists in his 30-plus years at Menninger. 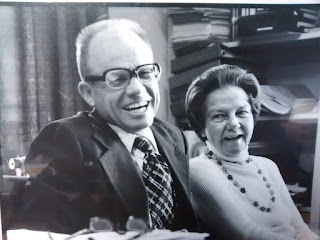 During his later years, Scripps said, Elmer liked to sit on the deck and look up at the stars.

In 1996, the American Institute of Stress honored Green with the Hans Selye Award, recognizing his achievements in biofeedback research.

Green was an accomplished scientist and mystic. His legacy is likely to live on a long time.